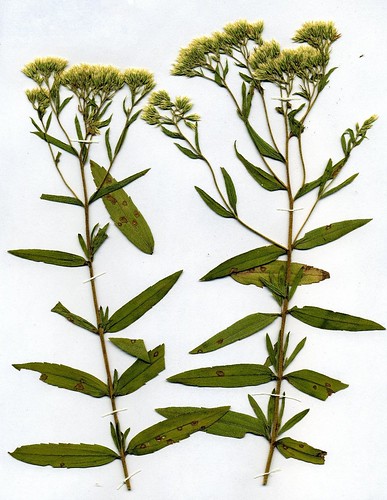 White Thoroughwort is an herbaceous perennial with a hairy stem that may grow to 1 m in height. The leaves are oppositely arranged, unstalked or nearly so, narrowly elliptic to lance-shaped, with 3 prominent veins oriented from base to tip, toothed on the margin, resin-dotted and more-or-less hairy, to 10 cm in length and to 2.5 cm in width, and obtuse to rounded at the tip. The white flowers, appearing from August to October, are individually minute and are aggregated in small clusters (“heads”) at the tips of the branches, which tend to reach the same height and give the overall plant a flat-topped appearance. Each individual head has numerous overlapping white and hairy scales, or bracts, below where the flowers are attached. In this species the bracts of the head, especially the upper ones, have an exceptionally long and pointed white tip as compared with the lower bracts, a feature not found in most of the other species of the genus Eupatorium. The fruits are minute, dry, and 1-seeded, with a tuft of hairs at the tip that promotes wind dispersal.

It grows in openings, clearings, rights-of-way, thickets, and open woods.

White Thoroughwort ranges from Connecticut to Indiana and south into Florida and Louisiana. In Pennsylvania, it represents a southerly species and has been documented historically in the southeastern counties.