This species is found in deep shaded areas of non-calcareous rock houses and forms small colonies through asexual production. 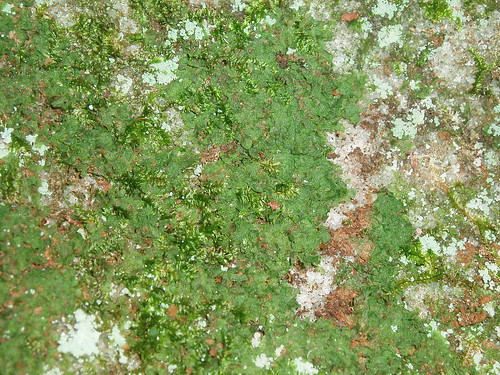 Appalachian gametophyte fern (Vittaria appalachiana) is a unique type of fern that lacks true leaves, stems, and roots. Individual plants are only about 3mm long, but may grow in mat-like colonies that can be several inches or more. This species greatly resembles a liverwort or moss, and often grows in association with those plants. The fern reproduces itself by producing tiny, bud-like structures (gemmae) that are able to give rise to new individuals.

The PA Biological Survey (PABS) considers Appalachian gametophyte fern to be a species of special concern, based on the few occurrences that have been recently confirmed and its extremely specialized habitat. It has a PA legal rarity status and a PABS suggested rarity status of Threatened. Because of its minute size, this fern may be more frequent than the current records suggest.

It grows on cool, damp, shaded rock outcrops and cliffs, particularly on sandstone, in forested areas.

In Pennsylvania, this species has been documented in scattered locations, especially in the mountainous counties.

Since hemlock (Tsuga canadensis) is often a major constituent of the forest at populations of this fern, the loss of hemlock due to the hemlock woolly adelgid (Adelges tsugae) represents a threat.

The viability of the known populations of Appalachian gametophyte fern and its habitat can be enhanced by maintaining a buffer of forest immediately surrounding the rock outcrop that supports the population.

Rhoads and Block The Plants of Pennsylvania pg. 78-9