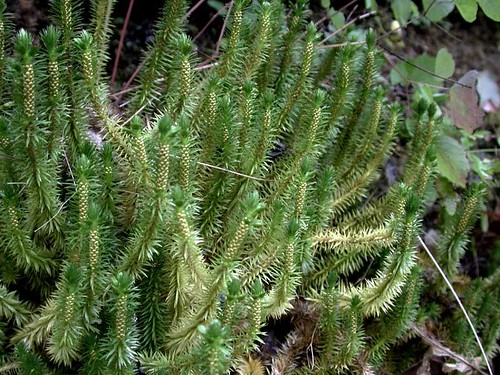 Rock Clubmoss is a fern relative, and belongs to the group of evergreen plants known as "ground-pine" or "running-pine" that have been utilized for making Christmas wreaths. Rock Clubmoss is an ascending or upright small plant with stems up to 15 cm in height, but is usually shorter. The leaves are spirally arranged, spreading, somewhat needle-like, 3-8 mm in length, and form a dense covering on the stem. The species does not produce flowers, but reproduces itself by microscopic spores that are produced from small sacs located at the base of some leaves, as well as by asexual buds that can grow into new plants. This species greatly resembles Shining Clubmoss (Huperzia lucidula), which in Pennsylvania is a frequent and widespread species that grows in moist woods. Rock Clubmoss is a plant of smaller stature, with smaller and less lustrous leaves, and has a much more restricted habitat (rock surfaces near waterfalls) and distribution.

The species grows on exposed rocks and cliffs in vicinity of waterfalls, where the environment remains cool and humid.

Rock Clubmoss ranges from Ontario and Saskatchewan south into Georgia, Alabama, and Missouri. In Pennsylvania, it has been documented historically in a few northeastern counties.

The few known populations of Rock Clubmoss are located at relatively protected sites, but the potential loss of hemlock (Tsuga canadensis) at these locations due to the hemlock wooly adelgid (Adelges tsugae) represents a threat. It is also uncertain if Rock Clubmoss is successfully reproducing itself at the known sites, which is critical because of the already small population sizes.