This species can be distinguished because they are not fullly twisted at right angles to the blade (thus becoming more or less parallel to the ground on an erect frond). 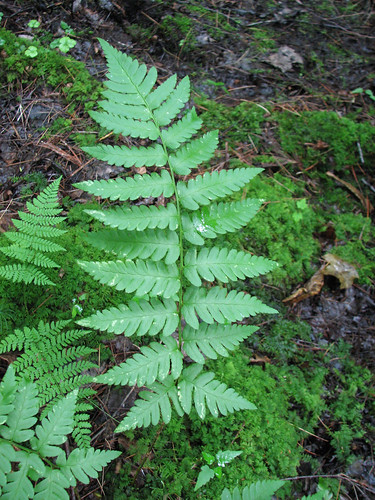 Clinton's wood fern (Dryopteris clintoniana) grows from 45cm to 1m tall. Fertile fronds, which have the reproductive spores on the underside, are deciduous and erect. Sterile fronds are smaller, evergreen, and mostly prostrate on the ground. The leaves are divided into leaflets, or pinnae, which are themselves lobed or toothed. The lowest pinnae are triangular in shape and about twice as long as wide. The fertile pinnae are not turned at an angle to the plane of the overall leaf, unlike the more common crested wood fern (Dryopteris cristata).

The PA Biological Survey (PABS) considers Clinton's wood fern to be a species of special concern, based on the few occurrences that have been recently confirmed and its wetland habitat. It does not have a PA legal rarity status, but has been assigned a suggested rarity status of Threatened by PABS. About fifteen populations, mostly of them in the northwestern region, are currently known from the state.

It grows in swampy woodlands.

In Pennsylvania, it has been documented historically in numerous widespread counties.

The viability of the known populations of Clinton's wood fern and its habitat may be enhanced by creating buffers around wetlands, controlling invasive species, and protecting the natural hydrology surrounding wetlands.