The common name for this species comes from the netted veins of the pinnae of both fronds and the chain-like rows of the sori. 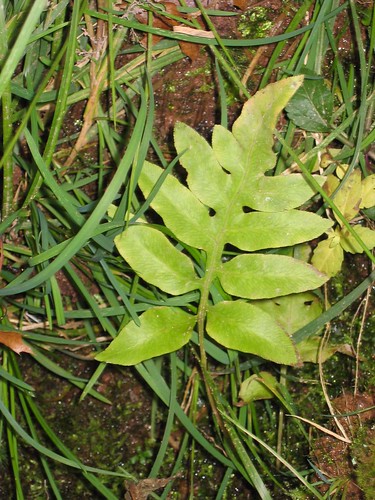 Netted chainfern (Lorinseria areolata) grows from 50-80cm in height and may form small colonies due to the presence of creeping underground stems. The leaves are easily distinguishable into vegetative and fertile types. The vegetative leaves have a typical fern-like appearance, being green, flattened, and divided into seven to twelve very deep lobes (or distinct leaflets on the lower part of the leaf) that are not further subdivided into smaller lobes. The leaf veins are conspicuous, and the fertile leaves of netted chainfern are dark colored, much narrower, not flattened and leaf-like, and have sporeproducing structures on their underside. The vegetative leaf of this species resembles the leaf of the sensitive fern (Onoclea sensibilis), a common species in Pennsylvania, but the lobes in netted chainfern tend to be alternately arranged along the leaf stalk while the lobes of sensitive fern tend to be oppositely arranged.

The PA Biological Survey (PABS) considers netted chainfern to be a species of special concern, based on the relatively few occurrences that have been recently confirmed and the wetland habitat. It has no PA legal rarity status, but has been assigned a suggested rarity status of Threatened by PABS. About thirty populations are currently known from the state.

It grows in swamps, seepages, wet woods, boggy wetlands and along the margins of streamlets.

In Pennsylvania, the species has been documented historically in scattered counties,
particularly in the Delaware River drainage.

The viability of populations of netted chainfern and its habitat may be enhanced by establishing buffers around wetlands, controlling invasive species, and protecting the natural hydrology surrounding wetlands.