Because its spores are usually fertile, rather than abortive, lobed spleenwort is regarded as a distinct species that is able to reproduce itself. 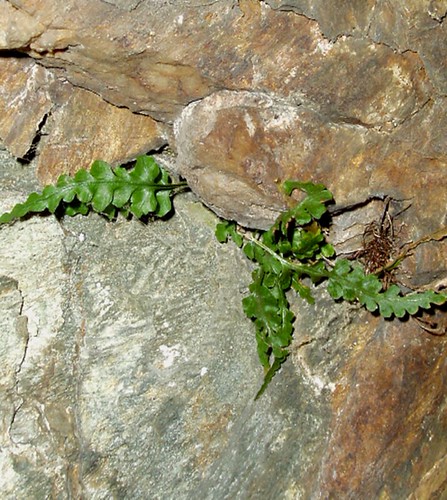 Lobed spleenwort (Asplenium pinnatifidum) is a small fern that grows from a short rhizome. The leaves, narrowly triangular in shape and tapering to an elongated tip, may be up to 17cm long but are often much shorter. The leaf margins have a lobed outline, with the lobes tending to get deeper near the base of the leaf. The leaf stem is mostly green, but maroon at the base. As in most ferns, the spores are produced on the underside of the leaves.

The PA Biological Survey (PABS) considers lobed spleenwort to be a species of special concern, based on the few occurrences that have been recently confirmed and its specialized habitat. It does not have a PA legal rarity status, but has been assigned a suggested rarity status of Rare by PABS. About two dozen populations, mostly with few individuals, are currently known.

In Pennsylvania, it has been documented historically at scattered