The genus name of this species comes from a name used for a fern that was supposed to cure diseases of the spleen. 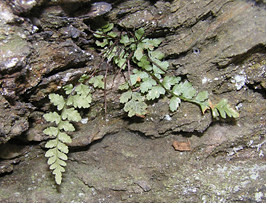 Bradley's spleenwort (Asplenium bradleyi) is a small fern that grows on rocks. The leaves are generally lance-shaped, 2-17cm long, and divided into 5-15 pairs of leaflets, or pinnae. The pinnae are roughly triangular in shape and have toothed or lobed margins. Pinnae are largest at the base of the stem and gradually decrease in size as they approach the top of the stem. The lower half of the leaf stem is maroon-colored and the upper half is green. As in most ferns, the spores are produced on the underside of the leaves.

The PA Biological Survey (PABS) considers Bradley's spleenwort to be a species of special concern, based on the few occurrences that have been recently confirmed and its specialized habitat. It has a PA legal rarity status of Threatened and has been assigned a suggested rarity status of Endangered by PABS. Fewer than 10 populations, all with few individuals, are currently known from the state.

In Pennsylvania, it is near the northeastern end of its range, and has been documented historically in a few southeastern counties.

Because of its small populations in the state, Bradley's spleenwort is vulnerable even without such threats as indiscriminate spraying of herbicide, quarrying, invasive species, and forest fragmentation.