If the raw fruit of this species were to be squeezed it would give off a pool like, chlorine smell. 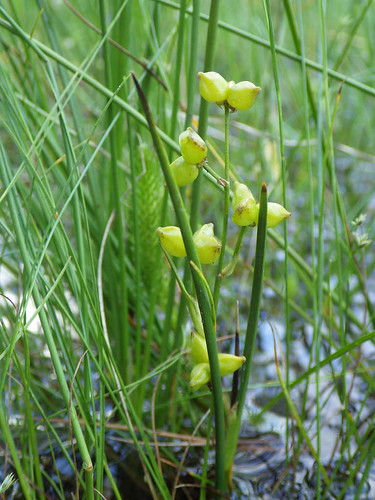 Pod-grass (Scheuchzeria palstris) is a perennial grass-like plant, greatly resembling a rush (Juncus sp.), with a zig-zag stem that may grow to 1.5m in height. The plant often forms colonies because of the presence of wide-spreading underground stems, or rhizomes. The hairless leaves are alternately arranged, consisting of a prominent basal sheathing portion that envelopes the stem and a linear and elongate, ascending blade that is 5-30cm in length and less than 1-4mm in width. The most distinctive leaf feature may be the presence of a small pore-like opening just below the tip. The minute flowers, appearing in late May to July, are greenish and often tinged with yellow or red, 2-4mm in length, and occur in stalked clusters above the leaves. The plant gets its common name, and is probably most conspicuous, in the fruiting stage, which consists of a dry pod, typically grouped in threes and connected at their bases, containing small seeds.

Pod-grass has a transcontinental range across the cooler regions of North America. In Pennsylvania, it represents a northerly species, and has been documented historically mostly in the northern counties. It grows in bogs and peaty wetlands.

The viability of populations of pod-grass and its habitat may be enhanced by creating buffers and protecting the natural hydrology surrounding wetlands and controlling invasive species. Pod-grass is often an indicator for bog habitats that may feature various orchids, insectivorous plants such as sundew, bladderwort, and pitcher plant, and other interesting species.