The submerged leaves are dark green with brown leaves (stipules) at the base, but the floating leaves are lighter green in color and slightly indented at the base. 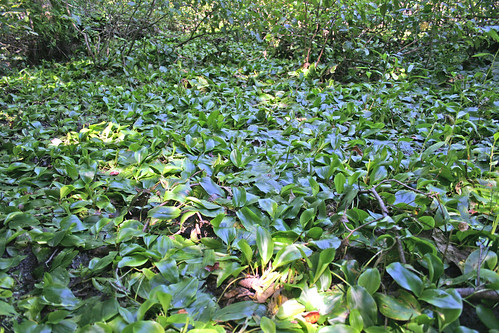 Spotted pondweed (Potamogeton pulcher) is an aquatic perennial herb that grows in standing water. The stems of this species are up to 50cm  long and have dark purple spots. The leaves are of two types, floating and submersed. The floating leaves are oval to elliptic, rounded, or heart-shaped at the base, and have long, purple-spotted stalks. The submersed leaves are broadly lance-shaped, up to 3cm wide, and short-stalked or stalkless. The flowers are produced in dense spikes that are 2-4cm long. Individual flowers are inconspicuous and have four small, greenish petals or sepals. Spikes are held above the water and can be seen June through August.

The PA Biological Survey considers the spotted pondweed to be species of special concern, based on the relatively few occurrences that have been confirmed, the wetland habitat, and the regional rarity. It has been assigned a rarity status of Endangered.

In Pennsylvania, it grows in shallow, acidic streams, vernal ponds, in swamps and on muddy shores.

Conservation of spotted pondweed will depend upon the protection of existing populations and maintenance of their wetland habitat. This may include removing invasive plants and creating buffers to help protect populations from the effects of run-off or flooding. Sustaining appropriate water levels will also be important for maintaining high quality habitats.