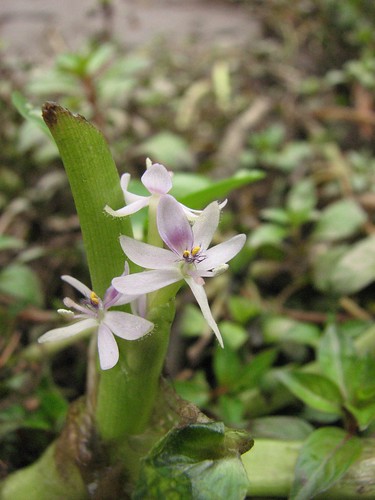 Mud-plantain (Heteranthera multiflora) is a creeping perennial herb with hairless stems. The leaves are alternately arranged, broadly heartshaped or kidney-shaped, untoothed on the margin, stalked at the base, rounded or very blunt at the tip, hairless on both surfaces, and with numerous curving veins on the fleshy blades. The flowers, appearing from July to October, are white to very pale purple and have six lobe-like segments. The male portion of the flower, the stamen, has purplish hairs, which helps to distinguish this species from the more common species Heteranthera reniformis, which has whitish hairs. The fruit is a many-seeded capsule.

The PA Biological Survey (PABS) has assigned mud-plantain a rarity status of Endangered, based on the few populations that have been documented, its restricted state range, and the very specialized habitat.

Mud-plantain grows in intertidal marshes, mudflats, and shorelines along the lower Delaware River. The plants are subjected to daily cycles of exposure and inundation.

In Pennsylvania, the species has been documented historically only in a few southeastern counties along the Delaware River.