This species is interesting due to its terminal inflorescences having separate male and female flowers. 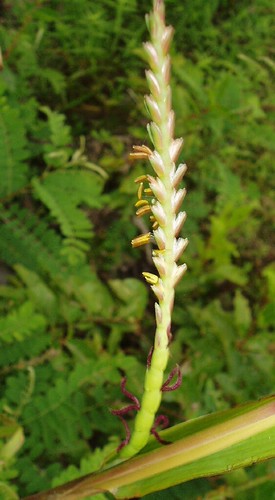 Eastern gamagrass (Tripsacum dactyloides) is a tall perennial grass that usually stands 1.2-2.4m tall, often forming conspicuous clumps. The leaves are flat, linear, and up to 3cm wide and 30-70cm long. The flowers, appearing from July to October, are arranged in one to four thick spikes that emerge from the top of the stem. The individual flowers are unisexual, with male flowers located at the top of the spike and the female flowers being embedded in swollen stem segments at the base of the spike.

The PA Biological Survey considers eastern gamagrass to be a species of special concern, based on the relatively few occurrences that have been recently documented and its wetland habitat. It has a PA legal rarity status of Undetermined and a PABS suggested rarity status of Endangered.

It grows in damp to wet places in openings, streambanks, islands in the Susquehanna River, and sometimes in disturbed ground.

In Pennsylvania, it represents a southerly species, and has been documented historically in some of the southeastern counties.

With fewer than ten populations in PA, eastern gamma-grass is vulnerable to habitat loss and changes in hydrology that might influence habitat quality, such as damming or draining rivers and increased groundwater use. Conversion of floodplain forests, browsing by deer, and encroachment by invasive plants may degrade the quality of existing habitat. Nutrient enriched run-off from surrounding land can affect the water chemistry to which this species is sensitive.

Conservation of eastern gamagrass will depend upon the protection of existing populations and maintenance of its required habitat. This may include removing invasive plants and creating buffers to help moderate the effects of run-off and flooding. Sustaining appropriate water levels will also be important for maintaining high quality habitats.