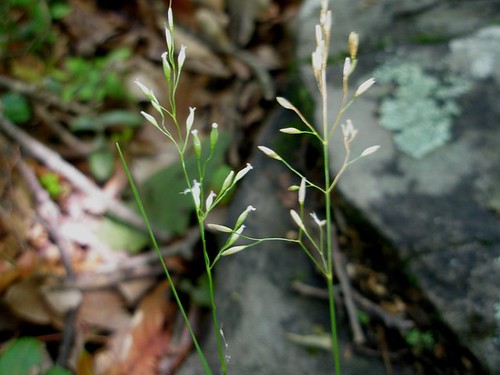 Slender Mountain-ricegrass is a perennial grass that grows in a tufted clump and produces erect stems that may reach 0.5 m in height. The leaves are alternately arranged, consisting of a basal sheath portion that envelopes the stem and an extremely narrow, flattened or inrolled, and untoothed blade that is up to 0.3 m in length, about 2 mm in width, and pointed at the tip. The minute flowers, appearing primarily in May and June (but sometimes sporadically later in the year), occur in a relatively short and few-branched cluster, or inflorescence, at the tip of the stem. The inflorescence contains many individual spikelets about 3-4 mm in length, with each including a single flower and later a single fruit. The tip of the spikelet usually has a tiny hair-like projection, or awn, which is 1-2 mm in length, but is rather delicate and often breaks off. In summer, well after the fruits have fallen, the species may often be identified by the persistence of the inflorescence, which turns pale brown and has a short, few-branched appearance.

Slender Mountain-ricegrass has a transcontinental range across the cooler regions of North America. In Pennsylvania, it represents a northerly species and has been documented historically in a few northeastern counties.

Most populations of Slender Mountain-ricegrass in Pennsylvania are situated in remote areas where the habitat is likely to be kept in a natural state. Active management, such as the use of prescribed fire, may be beneficial in maintaining these areas or in creating additional habitat.