Even though the common names says this species is three flowered, it has spikelets with two to four flowers each, with two being the most common. 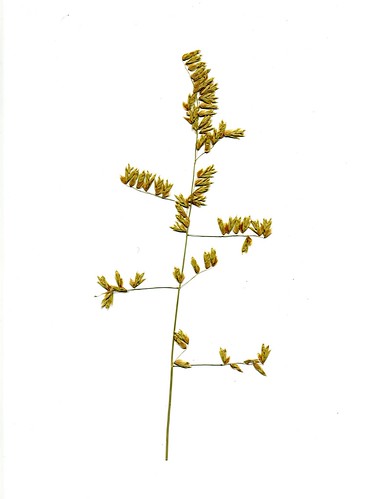 Three-flowered melicgrass (Melica nitens) is a perennial grass that grows from 50cm- over a meter in height. The leaves are alternately arranged, linear, flattened, elongate, 10-20cm in length and about 5-12mm in width. The flowers, appearing from late May into July, are grouped in spikelets that are scattered in a branched terminal cluster. The individual spikelets are 9-12mm in length, contain usually three flowers, and tend to hang downward when mature.

The PA Biological Survey (PABS) considers three-flowered melicgrass to be a species of special concern, based on the few occurrences that have been recently confirmed. It has a PA legal rarity status and a PABS suggested rarity status of Threatened. About five populations are currently known from the state.

It grows on cliffs, rock outcrops, rocky slopes and shores, and dry woods.

In Pennsylvania, this species reaches a northern border of its known range and has been documented historically in a few southern counties.

The known populations of three-flowered melicgrass have threats from natural succession, invasive species, and the indiscriminate application of herbicide.

Because of the preference of the species for relatively open habitats, active management, such as fire, mowing, or invasive species removal, may be required to maintain the proper successional stage and ecological conditions for the species to thrive.