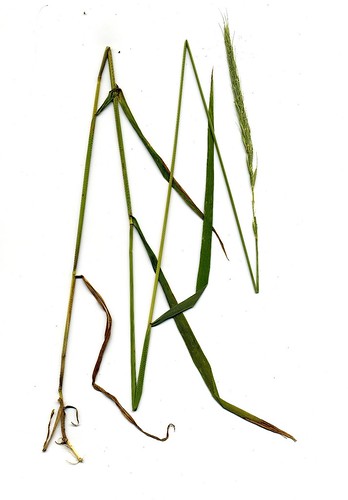 Slender Wheatgrass is a perennial grass that may grow to 1 m in height. The leaves are alternately arranged, consisting of a basal sheath portion that envelopes the stem and a linear shaped, flattened, and untoothed blade that is 5-13 cm in length, about 7-12 mm in width, and pointed at the tip. The minute flowers, appearing in summer, occur in an elongate and very slender unbranched inflorescence. The inflorescence contains many individual flower-bearing spikelets that occur singly in an alternating arrangement. The lower part of each spikelet, more specifically the scales called glumes, tends to remain attached to the inflorescence after the fruits mature and drop from the plant. This species closely resembles the weedy and exotic species known as quackgrass (Elymus repens), but the latter produces well-developed rhizomes (often forming colonies), has longer anthers, a hairless spikelet axis, and the complete spikelet (including the glumes) falls as one unit at maturity.

Slender Wheatgrass has a transcontinental range across North America. In Pennsylvania, it has been documented historically mostly in the northern counties.

The viability of populations of Slender Wheatgrass will require maintaining early successional conditions and controlling invasive species. In some cases, active management, such as periodic mowing or the use of prescribed fire may be needed to create the proper successional stage and ecological conditions for this species to thrive.