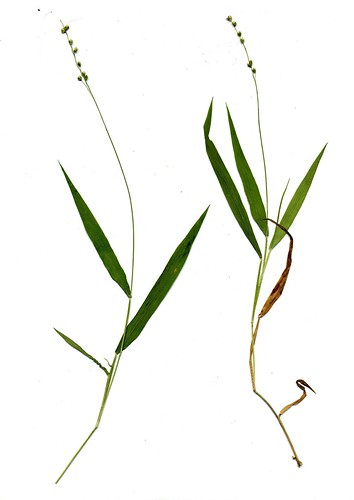 Slender Panic-grass is a perennial grass that may grow to 0.6 m in height. The leaves are alternately arranged, consisting of a basal sheathing portion, which envelopes the stem and varies from hairy to hairless, and a broadly lance-shaped, flattened, and untoothed blade that is 10-15 cm in length and up to about 2.5 cm in width, heart-shaped at the base, and long-pointed at the tip. The flowers, appearing first in June and July, and sometimes again in the fall, occur within small spikelets that average about 3/16 inch (3.5 mm) in length, have scattered hairs on the outside surface, and are located at the middle and upper part of the stem. In addition to the size of spikelets, the shape of the flowering cluster, or inflorescence, is the main distinguishing feature of this species. While most species of panic-grass have inflorescences with obvious horizontal or ascending branches, in Slender Panic-grass the branches tend to be few and with erect or strongly ascending stalks, giving the overall inflorescence a long and very narrow aspect.

Slender Panic-grass ranges from Nova Scotia to Saskatchewan and south into New Jersey, West Virginia, Michigan, and Iowa. In Pennsylvania, it represents a northerly species and has been documented historically mostly in the northeastern counties.

The populations of Slender Panic-grass in Pennsylvania are situated in remote areas where the habitat is likely to be kept in a natural state. Active management, such as the use of prescribed fire, may be beneficial in maintaining these areas or in creating additional habitat.