The name for this species comes from a Greek word meaning two-flowering; the plant has two flowering periodsin the spring and late summer. 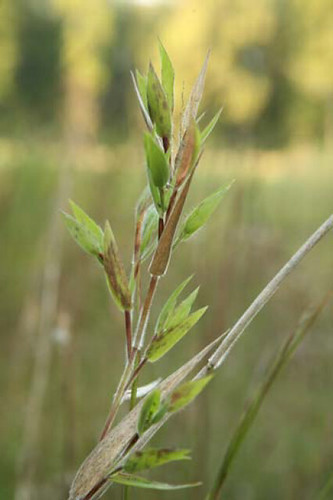 Velvety panic grass (Dichanthelium scoparium) is a perennial herb that may grow up to 1.5m in height. The stems are covered with short, soft, dense, spreading hairs that give the species its name. The portion of the stem just below each node or joint usually has a ring that is sticky to the touch.The leaf blades are alternately arranged, lance-shaped, with parallel veins, not toothed on the margin, and covered with the same sort of hairs as the stem. The flowers, appearing from June to October, are individually only a few millimeters in length and are arranged in clusters that are found at the top of the stem and its branches. Of the many species of panic-grass in the Pennsylvania, this one can be recognized by the velvety hairs on the stems and leaves.

The PA Biological Survey (PABS) has assigned velvety panic grass a rarity status of Endangered, based on the limited number of populations documented for the species and its small state range. Recent field surveys have been successful in discovering more populations of the species, so this rarity status may be amended to reflect a lesser degree conservation significance.

In Pennsylvania, it represents a southerly species, and has been documented in a few southeastern counties.

Some of the known populations of velvety panic-grass have threats from habitat loss, competition, and exotic species.