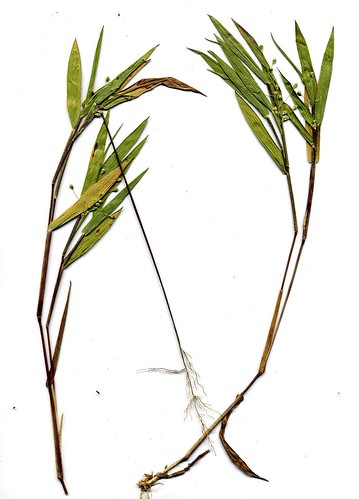 Heller's Witchgrass is a perennial clump or bunch grass that may grow to 60 cm in height, but is often much shorter. The leaves are alternately arranged, consisting of a basal sheathing portion, which often has a purplish tinge and is frequently hairy, that envelopes the stem and a lance shaped, flattened, and untoothed blade that is 5-13 cm in length and about 12 mm in width, pointed at the tip, and usually somewhat hairy on the lower side. The flowers, appearing first in June and July, and again later in the fall, occur in a compactly-branched inflorescence containing many individual broadly-ovoid spikelets that are about 3-4 mm long and have, at least compared to many of other species in the genus Dichanthelium, relatively thick veins running from top to bottom. There are many species of panic-grass in Pennsylvania, and they are difficult to identify since they mostly require the use of microscopic features to distinguish the species; in general, this species has a combination of relatively broad leaves, prominently-veiny and rounded spikelets, and compact inflorescences.

It grows in open, sunny places, such as grasslands, fields, thickets, and rocky openings, especially on well-drained serpentine, limestone and diabase substrates.

Heller's Witchgrass has a transcontinental range across North America. In Pennsylvania, it has been documented historically mostly in the southeastern counties.

The viability of populations of Heller's Witchgrass often requires maintaining early successional conditions and controlling invasive species. Active management, such as periodic mowing or prescribed fire, may be needed to create the proper successional stage and ecological conditions for this species to thrive. Quarrying and habitat loss are threats in some locations.