Both humans and wildlife can find use in this species - humans for dried arrangements and seeds/nesting material for birds. 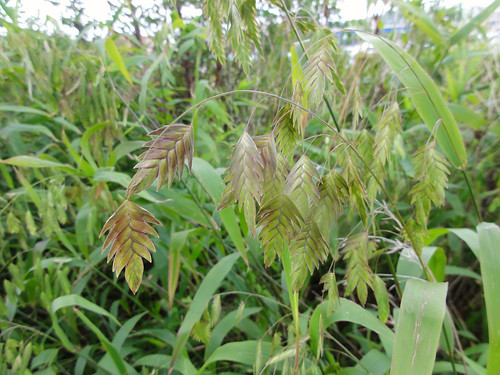 Wild-oats grows on river and stream banks and in moist woodlands.

Part of the floodplain habitat formerly occupied by wild-oats has been converted to agriculture, industry, and housing. The remaining habitat has been impacted by damming of rivers, which alters the natural flooding regime, and by invasive exotic species.Wild-oat is critically imperiled in Pennsylvania, at the northeastern edge of its natural range; the species is more secure to the south and west.

Wild-oats colonies may be impacted flood regime modifications and timber harvesting. It is also threatened by competition from aggressive non-native species such as Japanese knotweed (Polygonum cuspidatum) and Japanese stiltgrass (Microstegium vimineum).