This species has some commercial uses inclduing latex (rubber), fiber, or even fuel. 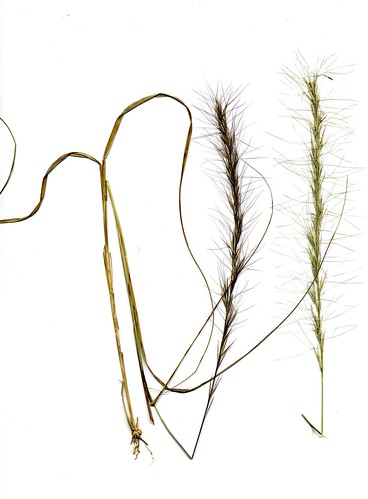 Arrow-feather three-awned grass (Aristida purpurascens) is a slender perennial grass that grows from 50-75cm high. The leaves are linear, elongate, less than 2mm wide and 10cm long. The individual flowers are in spikelets, with their most conspicuous feature being three hair-like projections, or awns, that are 1.5-2.5cm long  protruding from the top of the spikelet, and are oriented more-or-less perpendicular to the spikelet. The overall cluster of spikelets, located on the middle and upper stem, has a bristly appearance due to these awns.

The PA Biological Survey (PABS) considers arrow-feather three-awned grass to be a species of special concern, based on the few occurrences that have been recently confirmed and its specialized habitat. It has a PA legal rarity status and a PABS suggested rarity status of Threatened. Fewer than ten populations are currently known from the state.

In Pennsylvania, it has been documented historically primarily in the southeastern counties.

The populations of this species in the state are mainly on serpentine barrens and the seasonally scoured riverbed and shoreline rock outcrops along the lower Susquehanna River. The viability of the species on serpentine will require maintaining early successional, grassland conditions and controlling invasive species. The riverine populations will require maintaining the natural hydrology of the Susquehanna River, with its seasonal fluctuations in water levels, as well as retaining the natural conditions of the shorelines and islands.