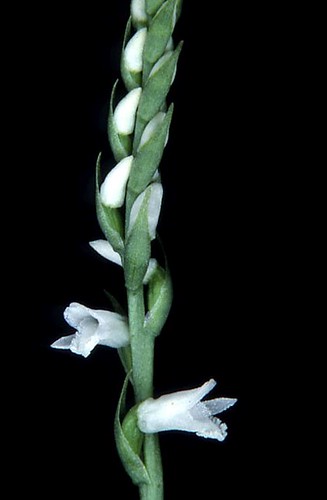 Little Ladies'-tresses is an herbaceous perennial with a hairless stem from 6 inches to 15-30 cm in height. The aerial stem arises from a solitary, finger-like root, unlike the multiple roots typical of its relatives. The leaves are alternately arranged, egg-shaped and short-stalked, to about 2.5 cm in length and 1 cm in width, and blunt at the tip. They typically wither by flowering time in late summer and fall, so the lower stem of a flowering plant appears leafless, although several leaf sheaths may be present. The white flowers, appearing in late August to October, are arranged in a loose spiral or coil around the stem. The surface of the stem along which the flowers are attached is hairless, a key identification feature. The individual flower has its sepals and petals, which average about 3 mm in length, projecting forward together in a tube-like manner, with the lowermost petal (called a “lip” in orchids) being all white (not marked in the center with green or yellow as in some relatives) and having crisped margins around its exposed tip.

It grows in grasslands, meadows, clearings, and open woods.

Little Ladies'-tresses ranges from southern New England to Michigan and south into Florida and Texas. In Pennsylvania, it has been documented historically mostly in the southern, particularly the southeastern, counties.

The viability of populations of Little Ladies'-tresses and its habitat may require active management, such as periodic mowing or invasive species removal, in order to maintain the proper ecological stage for the species. Excessive deer browse may be a threat. Additional field surveys are needed for species, which can be difficult to detect because of its inconspicuous and unpredictable nature.