The flower of this species lacks nectar guides and fragrance - insect pollination has not been observed so it apears to be a self-pollinator. 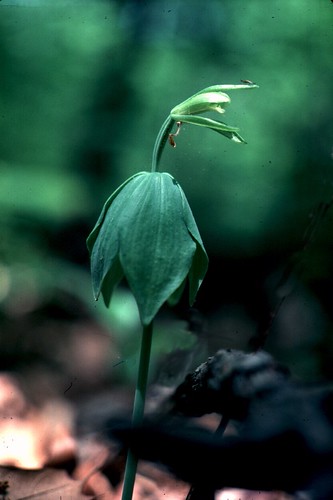 Small whoreld-pogonia (Isotria medeoloides) is a delicate orchid with a stout, upright stem 20-25cm high, topped with a whorl of four to six leaves. Single or paired yellowish-green flowers, 2.5cm long, arise from the center of the leaf whorl. This species is most clearly distinguished from the more common l. verticillata (large whorled pogonia) by the shape of the sepals. Sepals in the small whorled pogonia are greenish, not spreading, and are less than a few centimeters long. The large whorled pogonia has widely spreading, purplish sepals, 3.5-6cm long.

Nearly all small whorled-pogonia populations occur in second growth or relatively mature forests. Pennsylvania populations seem to be most abundant on dry east or southeast facing hillsides in mixed oak forests. The soils are generally rocky and somewhat acidic.

The small whorled-pogonia is considered our rarest orchid. Only three populatoins are known in Pennsylvania. Data collected by The Nature Conservancy in 1985 shows that approximately fifty-two populations existed from Ontario to South Carolina. The main threats to this endangered orchid are collecting and habitat alteration.