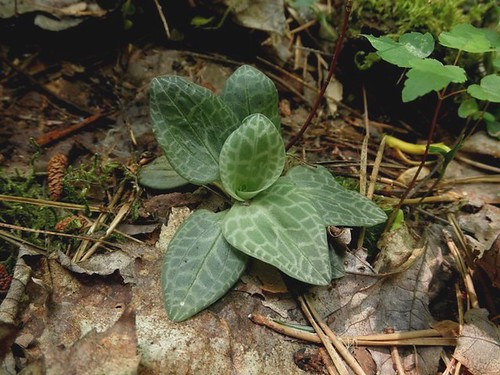 Checkered Rattlesnake-plantain is a perennial herb that may grow up to 0.3 m in height, but is often much smaller. The leaves, except for a few very small scales on the stem, are clustered in a rosette of 3-7 at the base of the plant. The veins of the leaf blades, particularly the lateral veins and their branches, are outlined in white. This pattern contrasts with a similar looking, but much more common and widespread species of Rattlesnake-plantain, Goodyera pubescens, which has the white coloration especially prominent on the midvein and less so on the lateral veins. Otherwise, the blades of G. tesselata are green, elliptic or egg shaped, untoothed on the edges, thick in texture, relatively short-stalked, and mostly 2.5-7.5 cm in length. The white flowers, which appear in July and August, are scattered in an alternate arrangement on the middle and upper part of the somewhat sticky-hairy stem. The flower parts are complex, with the lowermost petal, or lip, having a spout-like tip. The fruit is a dry capsule with many minute seeds.

The species grows in dry to moist upland woods, often with conifers being a substantial component of the tree canopy.

Checkered Rattlesnake-plantain ranges from Newfoundland to Manitoba and south into New Jersey, Pennsylvania, and the Great Lakes states. In Pennsylvania, it represents a northerly species and has been documented historically in a few central and northern counties.

Excessive deer browse may be a threat at some locations.

The viability of populations of Checkered Rattlesnake-plantain and its habitat may be enhanced by providing a forested buffer around populations and controlling invasive species.