Even though the flowers of this species are fragrant and showy there is little to no pollen available to pollinators from this plant. 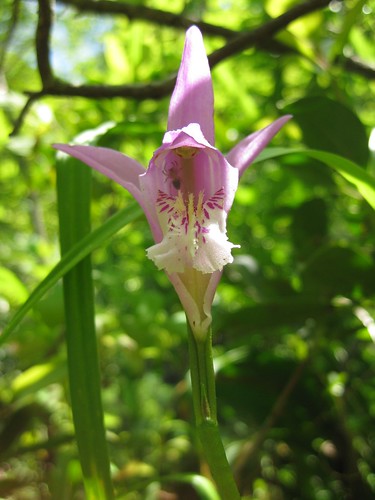 Dragon's-mouth (Arethusa bulbosa) is a magenta-pink orchid with flowers 2.5-5cm long. The lower lip is purple-spotted and crested with yellow hairs. The flower stalk, 5-38cm, arises from a bulb loosely rooted among mosses. A single, grasslike leaf develops after the plant blooms.

Only 3 of 26 historical populations in Pennsylvania can still be found. One population was destroyed when its wetland habitat was inundated during the creation of Pymatuning Reservoir. Eight populations have not been relocated although suitable habitat still remains at the sites. It is suspected that these plants were stolen. Collection, deer browsing, and habitat destruction contribute to the decline of this beautiful orchid.

One population is in a privately owned natural area. The site is monitored by the Presque Isle Audubon Society and the Botanical Society of Western Pennsylvania. Habitat at a second site is protected by current state regulations. Plants from the third site located on State Forest land will be included in the Public Wild Plant Sanctuary Network. State regulations prohibit the taking of any plant from State Forests. In addition, the Wild Resource Conservation Act sets fines for removal of Endangered and Threatened plant species, without landowner permission, at $100 per plant.