Trillium species' leaves make a good edition to salad or soup as an herb. The roots can be used for medicine as an antiseptic, diuretic and ophthalmic. 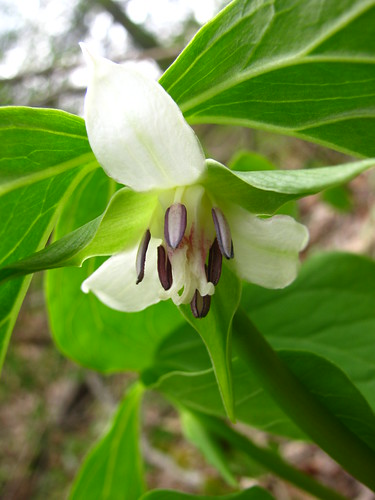 Nodding trillium (Trillium cernuum) is a perennial herb that grows up to 40cm tall. The leaves occur in a whorl of three, with the leaf blades being stalkless or nearly so, oval to diamond-shaped,  5-15cm long, and hairless. The single flower has a drooping stalk and hangs below the leaves. Each 2.5-4cm flower has three white to pinkish petals backed by three alternating green sepals. The petals curve strongly upward toward the bottom of the leaves. The blooming time is in April and May.

The PA Biological Survey considers nodding trillium to be a species of special concern, based on the relatively few occurrences that have been recently documented. It does not have a PA legal rarity status, but has been assigned a PABS suggested rarity status of Undetermined. Fewer than 10 populations are known.

In Pennsylvania, it occurs mostly in the southeastern counties, where it grows in rich, moist woods.

Habitat loss, land conversion for development, and displacement by invasive species have all played a part in the decline of nodding trillium populations. Many of the remaining rich, moist forests in southeastern and south-central Pennsylvania have become increasingly fragmented, which further degrades habitat quality. Overabundant deer populations have also contributed to reduced nodding trillium numbers.

Maintenance of known populations and preservation of the communities where nodding trillium grows will be crucial to its survival. Creating buffers around fragmented habitat and removal of invasive species will help to maintain populations and encourage new population growth. The management of the known sites requires long term monitoring of populations.