This fruit of this species is cathartic. For general sickness the steams and fruits can be used, and the whole plant can be used to help with stomache problems. 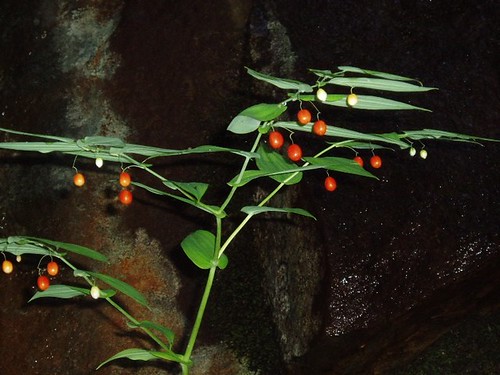 Twisted-stalk (Streptopus amplexifolius) is a branched, more-or-less hairless, perennial herb reaching 1m in height. The leaves are alternately arranged along the stem, entire on the margin, sharp-pointed at the tip, and have bases that clasp the stem. The flowers, which are greenish/white in color and about 1cm in length, appear in May or June and occur singly or in pairs along the stem. The fruit is reddish and berry-like. The rose mandarin (Streptopus roseus) is a similar species with more hairy stems and leaves and pinkish flowers.

The twisted-stalk has been given a rank of Endangered on the Plants of Special Concern in Pennsylvania list by the Pennsylvania Biological Survey, based on the relatively few recent records that have been documented in the state and its relatively specialized habitat.

The species is found generally in moist woods throughout its range. In Pennsylvania, it typically grows on damp to dripping rock outcrops and cliffs, often in the vicinity of waterfalls, in cool woods and ravines.

It occurs mainly in the northeastern counties in Pennsylvania.