Young leaves and the bulb of this species can be eaten raw or cooked for a delicious, crisp taste. 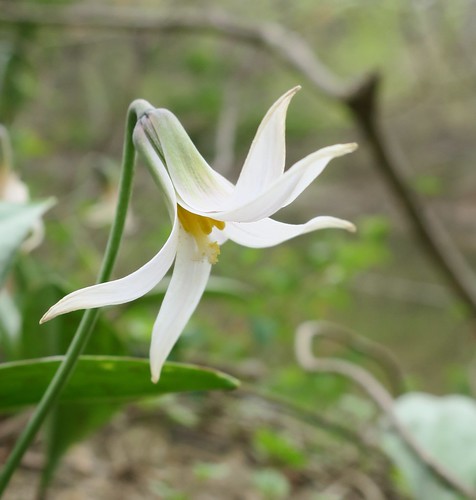 White trout lily (Erythronium albidum)  is a perennial herb, producing a stem 10-15cm tall. The leaves are basal and paired, usually spotted or mottled, elliptic or lance-shaped and up to 15cm long. The white, sometimes slightly tinged with blue or pink, flowers are produced singly at the end of long stalks in late April and early May. The flowers nod downward and have white six petals/sepals that curve strongly upward.

The PA Biological Survey considers white trout lily to be a species of special concern, based on the relatively few occurrences that have been confirmed. It has been assigned a rarity status of Rare.

The species grows in bottomlands, floodplains, and lower slopes, especially on limestone substrates.

In Pennsylvania, the occurrences are scattered throughout the state, particularly along the major rivers and streams.

More field surveys are needed to determine the range, abundance, and ecological requirements of the white trout lily before a more definitive conservation status, if needed, can be assigned.