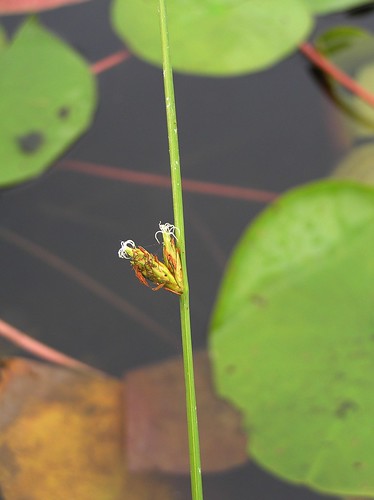 Water Bulrush is a grass-like plant that forms patches in shallow water due to its wide-spreading underground stems, or rhizomes. The plant may be completely submersed when in a vegetative state, and then has very narrow linear leaves that are mainly attached near the base of the plant and are extremely limp when removed from the water. If and when the plant flowers and fruits, an erect aerial stem is produced that may grow up to 1 m in height and protrudes out of the water. The flowers, appearing from July to September, are minute and are grouped in a single cluster that is about 7 to 12 mm in length that is located just below what appears to be the tip of the stem (actually the tip of an erect leaf that subtends the tip of the stem). The individual fruit is brownish, three-sided at maturity, about 3 mm in length, has 6 slender bristles attached at the base, and a prominent beak at the tip.

It grows in lakes, ponds, and slow-moving streams.

Water Bulrush has a transcontinental range across the cooler regions of North America. In Pennsylvania, it is considered a northerly species and has been documented historically in mostly the northeastern counties.

The viability of populations of Water Bulrush and its habitat may be enhanced by creating buffers and protecting the natural hydrology around wetlands, controlling invasive species, and avoiding the indiscriminate use of aquatic herbicides.