Smith, in the common name of this species, comes from its discoverer, Charles Eastwick Smith, who was a member of the Academy of Natural Sciences of Philadelphia. 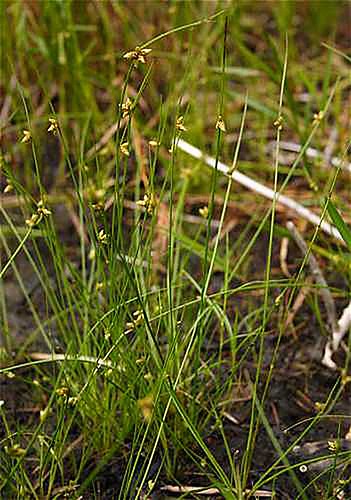 Smith's bulrush (Schoenoplectus smithii) is an annual herb with a soft, three-sided stem that may grow to half a meter in height, but is usually much smaller. The leaves, which may be absent, are mostly clustered at the base of the stem, linear in shape, entire on the margin, and variable in length. The flowers, appearing from July to September, are individually only 1-2mm in length, being aggregated in stalkless clusters that are attached at a single point on the middle to upper portion of the stem, and are overtopped by a slender leaf-like bract. The individual fruits are black at maturity, about 2mm in length, and lack the subtending bristles found in Schoenoplectus purshianus, which is a more common, similar-looking species.

The PA Biological Survey (PABS) has assigned Smith's bulrush a rarity status of Endangered, based on the relatively few populations that have been confirmed, the usually small population sizes, the limited state range, and the specialized habitat.

In Pennsylvania, it has been documented historically in scattered locations, particularly in the southeastern counties along the Delaware River and in the northwestern counties.