The plant was ranked 11th out of 250 on a list of potential antifertility plants in China. 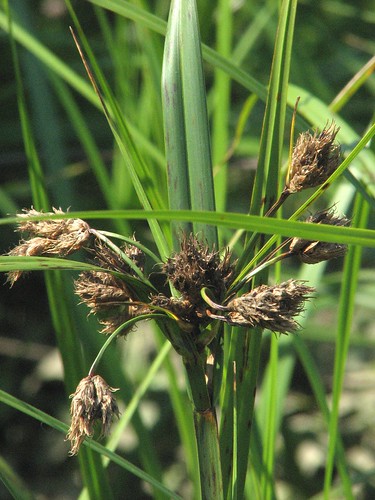 River bulrush (Schoenoplectus fluviatilis) is a perennial herb that forms colonies from underground stems. The triangular aerial stems are robust and may grow from less than 1-2m in height. The leaves are alternately arranged, grass-like, elongate, averaging about one centimeter wide, and somewhat V-shaped in crosssection. The flowers, appearing from June to August, are grouped in 1.5-4cm spikelets. The spikelets are grouped in a branching cluster at the top of the stem that is subtended by several spreading, leaf-like bracts. The individual fruits are about 3.5-5mm long.

The PA Biological Survey (PABS) considers river bulrush to be a species of special concern, based on the relatively few occurrences that have been recently confirmed and its wetland habitat. It has a PA legal rarity status and a PABS suggested rarity status of Rare. About thirty populations are currently known from the state.

It grows on the shorelines of rivers and streams, and also in marshes and other wet places.

In Pennsylvania, it has been documented
historically in the northwestern and southeastern counties.

Invasive species represent a threat to the habitat of river bulrush.

The viability of the riverine populations of river bulrush may be enhanced by maintaining the water quality and natural hydrology of the streams, with their seasonal fluctuations and scouring, as well as retaining natural conditions along the shoreline areas. For non-riverine populations, establishing buffers and protecting the hydrology around wetlands are necessary.