Since this species closely resembles the seedlings of many other sedge species living in the same habitat experts can use the unique shape of the flower head to correctly identify the plant. 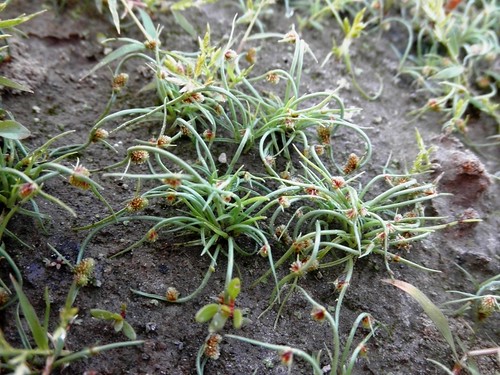 Common hemicarpa (Lipocarpha micrantha) is a tiny annual herb that may grow to 10cm in height, but often is less than 2.5cm. It has a tufted appearance with very narrow, hair-like leaves. The minute flowers, appearing from July to September, are grouped in compact clusters that are half a centimeter or less in length. Each cluster is subtended by hair-like bracts that well exceed the length of the cluster.

The PA Biological Survey (PABS) considers common hemicarpa to be a species of special concern, based on the few occurrences that have been recently confirmed and the specialized habitat. It has a PA legal rarity status and a PABS suggested rarity status of Endangered. Fewer than five populations are known from the state.

It grows on sandy shorelines along Lake Erie and in scoured river beds and shores of the Susquehanna River in the eastern part of the state.

In Pennsylvania, it has been documented historically only in a few widely scattered counties.