Small seadheads of this plant are often darker than other spikerushes making it fairly easy to identify. 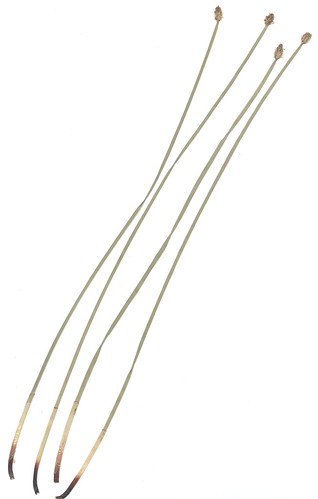 Flat-stemmed spike-rush (Eleocharis compressa) is an upright perennial herb that grows from 15-80cm tall, and forms colonies because of its underground stems. The aerial stems, which have a compressed or flattened appearance, make up most of the plant since the leaves are reduced to sheaths at the base of the stem. The minute flowers are held in a single spikelet, up to 13mm long, which is located at the top of the stem. The tiny fruits mature in summer and fall and are about about one milimeter long.

The PA Biological Survey (PABS) considers flat-stemmed spike-rush to be a species of special concern, based on the few occurrences that have been recently confirmed and its specialized habitat. It has a PA legal rarity status and a PABS suggested rarity status of Endangered. Fewer than ten populations are currently known from the state.

It grows on river shorelines and riverbed rock outcrops, which are subject to annual scouring.

In Pennsylvania, it has been documented historically in scattered counties, especially along the lower Susquehanna River.

Invasive species may be a threat at some locations.

Flat-stemmed spike-rush appears to be restricted to riverine habitats in Pennsylvania. The viability of the known populations will require maintaining the natural hydrology of the rivers, with the seasonal fluctuations and scouring, as well as retaining the natural conditions of the shorelines, riverbed outcrops, and islands.