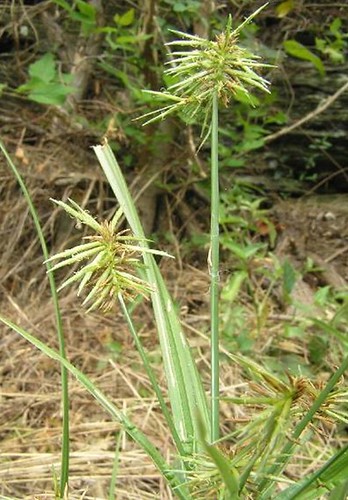 Reflexed flatsedge (Cyperus refractus) is a perennial herb with a triangular stem that grows from 30-80cm tall. The leaves are linear, V-shaped or flat, hairless, and up to 8mm wide. The flowers, appearing from July to August, are grouped in loose, open spikes made up of fifteen or more spikelets. Most of the spikelets extend horizontally or upward in a bottlebrush-like appearance, which helps to distinguish this species from similar species that have more downward-oriented spikelets. The spikelets are up to about 2.5cm long and covered by several overlapping scales, which enclosed the small (3mm) fruits.

The PA Biological Survey (PABS) considers reflexed flatsedge to be a species of special concern, based on the few occurrences that have been recently confirmed and its specialized habitat. It has a PA legal rarity status and a PABS suggested rarity status of Endangered. Fewer than five populations are currently known from the state.

It grows on sandy shorelines and scoured river islands in the Susquehanna River, and elsewhere in dry woods.

In Pennsylvania, this species reaches a northern border of its known range and has been documented historically in a few southeastern counties.

The viability of the riverine populations of reflexed flatsedge and its habitat will require maintaining the natural hydrology of the Susquehanna River, with its seasonal fluctuations in water levels, as well as retaining the natural conditions of the shorelines and islands. In upland sites, given the preference of the species for relatively open habitats, active management such as fire, mowing, or invasive species removal may be required to maintain the proper successional stage.