Even though both male and female flowers are in the infloresccence the antehers and stigma are not usually active at the same time, so the plant is not self-pollinating. 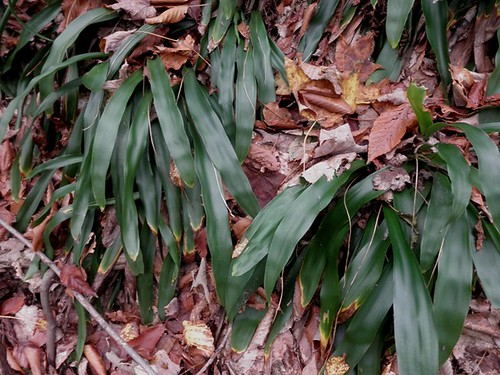 Fraser's sedge (Cymophyllus fraserianus) is a perennial grass, the only species in the genus Cymophyllus. Its stems, which have a triangular cross-section, grow 10-40cm above a set of broad basal leaves.

Fraser's sedge grows in rich mountain forests on moist slopes and along streams, within a fairly restricted range in the southern Appalachian Mountains.

The narrow range of Fraser's sedge and the loss of its habitat have reduced it to a relatively small number of scattered populations. There is some concern that the existing populations may be so small that they are falling victim to genetic drift, a loss of genetic diversity that can reduce a species' ability to adapt to changes in its environment.

Preservation of Fraser's sedge will require conservation of suitable habitat to allow existing populations to expand, control of invasive competitors, and protection from human disturbance. If sedge populations are able to expand and reestablish, the risk of genetic drift will be greatly reduced.