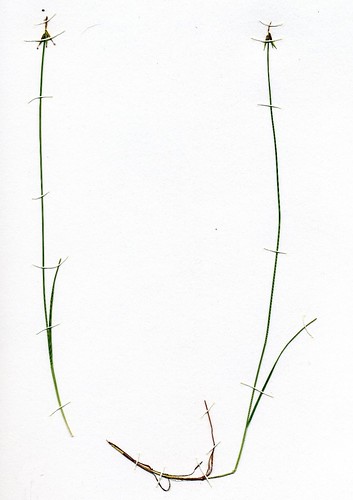 Few-flowered Sedge is a perennial, relatively delicate grass-like plant that produces wide-spreading underground stems, or rhizomes. The three-sided aerial stems may grow to 0.5 m in height, but are often much shorter. The leaves include a sheathing basal portion and an elongate and narrow blade that is alternately arranged and only about 1-2 mm in width. The minute flowers, which appear in spring, are clustered at the tip of the stem, with the male flowers at the very top and several (usually 1-6) female flowers directly below. The plant is most recognizable when fruiting in late spring and early summer, with the fruits being enclosed in sac-like structures, or perigynia, which in this species are particularly elongate and slender, being about 7 mm in length and 0.8-1.2 mm in width, tapered to a pointed tip, and conspicuously point downward.

Few-flowered Sedge has a transcontinental range across the cooler regions of North America. In Pennsylvania, it is considered a northern species, and has been documented historically in the glaciated northeastern and northwestern counties.

The viability of populations of Few-flowered Sedge and its habitat may be enhanced by creating buffers and protecting the natural hydrology around bogs and controlling invasive species. Few-flowered Sedge is an indicator species for bog habitats that feature various orchids, insectivorous plants such as sundew, bladderwort, and pitcher plant, and other interesting species.