This sedge is unusual in forming loose colonies of plants from long rhizomes, rather than tight tufts of leaves from short rhizomes. 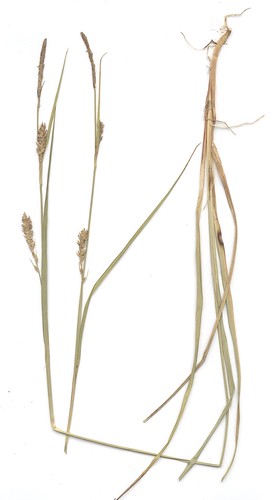 Mead's sedge (Carex meadii) is a grass-like perennial herb with a three-sided stem that reaches 15-60cm in height. The leaves are linear, flat, up to 6mm wide, and arise from brownish sheaths found on the lower portions of the stem. The individual flowers are minute and unisexual, with the male flowers grouped in a club-shaped spike at the top of the stem and female flowers grouped below in one to three cylindrical spikes. The female spikes support eight to thirty sac-like structures, or perigynia, which enclose the three-sided fruit. The fruits mature in late spring and summer.

The PA Biological Survey (PABS) considers Mead's sedge to be a species of special concern, based on the few occurrences that have been recently confirmed and its specialized habitat. It has a PA legal rarity status of Undetermined and has been assigned a suggested rarity status of Endangered by PABS. Fewer than fifteen populations are currently known from the state.

It grows in damp or seasonally wet meadows, grasslands, and marshes, particularly on serpentine or diabase substrates.

In Pennsylvania, it has been documented historically in scattered counties.

The viability of populations of this species and its habitat may be enhanced by creating buffers around wetlands, controlling invasive species, and protecting the natural hydrology around wetlands. Active management – such as fire, mowing, or invasive species removal – may be required to maintain the proper successional stage at sites where it grows.