The large pistillate spikelets have a striking appearance, resembling a spiked-club or similar weapon of medieval warfare. 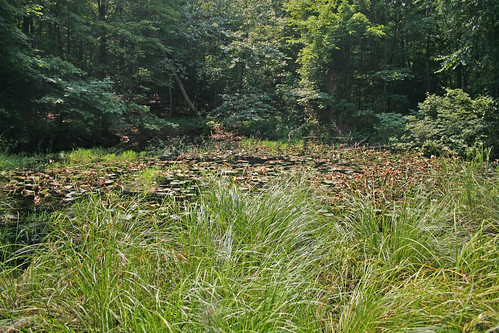 False hop sedge  (Carex lupuliformis) is a grass-like plant that grows up to 1m tall. Its common name refers to a superficial resemblance of its flower spikes to fruits of the hop vine. The leaves are linear, elongate, and up to 13mm wide. The flowers are arranged in bur-like cylindrical spikes at the top of flowering stems. Male and female flowers are found in separate spikes, with usually one slender male spike held above a cluster of two to six robust female spikes. The female spikes contain densely packed, inflated sac-like structures (perigynia) that have long projecting beaks.

The PA Biological Survey considers false hop sedge to be a species of special concern, based on the relatively few occurrences that have been confirmed and the wetland habitat. It has been assigned a rarity status of Endangered.

This species grows in wetlands, such as vernal ponds, bottomland pools, swamps, and marshes, especially on calcareous substrates.

In Pennsylvania, the occurrences are mostly in the southern half of the state.

More field surveys are needed to determine the range, abundance, and ecological requirements of the false hop sedge. Creating buffers around wetlands, controlling of invasive species, and protecting of wetland hydrology will help to maintain occurrences of the species.