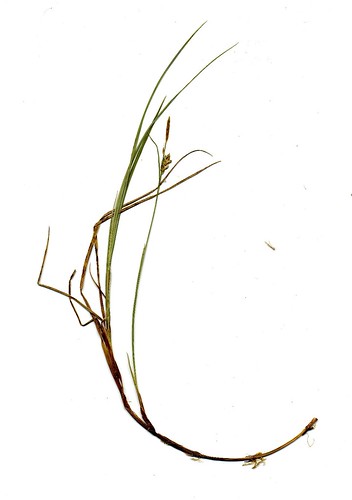 Mud Sedge is a grass-like plant that forms patches in boggy places due to its wide-spreading underground stems or rhizomes. The aerial stems are triangular in cross-section and may grow to 0.6m in height but are usually much shorter, sometimes only a few inches. The leaves have linear, elongated blades that are smooth, pale green, untoothed on the margin and to about 3 mm in width. The flowers, appearing in May to July, are minute and are grouped in male or female clusters, with the usually single and stalked male cluster in an erect position at the top of the stem and the female clusters, on slender drooping stalks and numbering from 1 to 3, farther down the stem. The female cluster consists of individual inflated sac-like structures, or perigynia, which are about 3 mm in length and contain 1 flower and later 1 three-sided fruit. In this species the individual perigynia are subtended and mostly hidden by small bracts.

The PA Biological Survey (PABS) considers Mud Sedge to be a species of special concern, based on the limited number of locations recently confirmed and the bog habitat. It has a PA legal rarity status of Tentatively Undetermined and a PABS suggested rarity status of Threatened.

Mud Sedge has a transcontinental range across the cooler regions of North America. In Pennsylvania, this species is considered a northerly species and has been documented historically mostly in the glaciated northeastern counties.

The viability of populations of Mud Sedge and its habitat may be enhanced by creating buffers and protecting the natural hydrology around bogs. Mud Sedge is an indicator for bog habitats that feature various orchids, insectivorous plants such as sundew, bladderwort, and pitcher plant, and other interesting species.