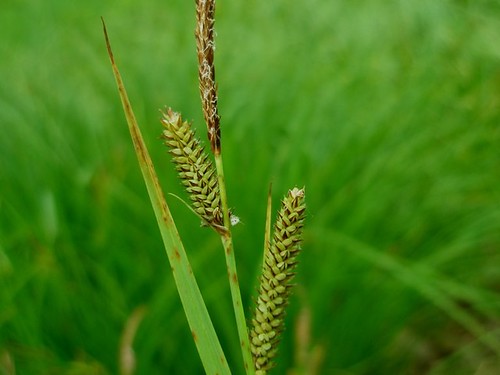 Cloud Sedge is a grass-like plant that forms tufts and has aerial stems that may be 1 m in height. The leaves have sheathing bases, with those on the lower stem lacking a green elongate blade, and those on the upper stem with elongate grass-like blades that may reach .3 m or more in length and are about 2-5 mm in width. The flowers, appearing from May to July, are minute and are grouped in male or female clusters, with the former in 1-3 slender, elongate, and stalked clusters at the top of the stem, and the latter in 1-3 unstalked and slightly broader female clusters farther down the stem. The plant is most identifiable in late spring and early summer, when within the female cluster the many individual inflated sac-like structures, or perigynia, have matured, which are about 1.5-2.5 mm in length, elliptic in outline and somewhat obtuse at the tip, green and often marked with minute reddish dots, and contain the somewhat flattened fruit. Each perigynia is subtended and exceeded in length by a brownish scale, features that help distinguish this species from Tussock Sedge (Carex stricta), a similar but much more common and widespread species.

The PA Biological Survey (PABS) considers Cloud Sedge to be a species of special concern, based on the few locations that have been recently confirmed and the wetland habitat. It has a PA legal rarity status of Tentatively Undetermined, but has been assigned a PABS suggested rarity status of Threatened

It grows in swamps, bottomlands, marshes, and vernal ponds.

Cloud Sedge ranges from Nova Scotia to Ontario and south into Maryland, West Virginia, the Great Lakes states, and Missouri. In Pennsylvania, it can be considered a northerly species and has been documented historically in mostly the central and eastern counties.

The viability of populations of Cloud Sedge and its habitat may be enhanced by creating buffers and protecting the natural hydrology around wetlands and controlling invasive species.