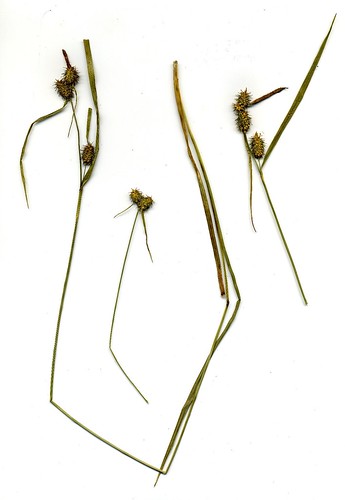 Yellow Sedge is a perennial grass-like plant with three-sided aerial stems that may grow to 0.6 m in height. The leaves include a sheathing basal portion and an elongate and narrow blade that is alternately arranged and averages about 2.5-5 mm in width. The minute flowers, which appear in spring, are clustered at two or more points on the upper stem, with the male flowers at the very top and 1 or 2 female flower clusters lower on the stem. The plant is most recognizable when fruiting in late spring and early summer, when the female clusters resemble small burs. Each cluster consists of numerous individual sac-like structures, or perigynia, which are about 5-6 mm in length, being broad at their base and tapering to a slender beak-like tip, and enclosing the 3-sided fruits.

The PA Biological Survey (PABS) considers Yellow Sedge to be a species of special concern, based on the limited number of locations recently confirmed and the very specialized habitat. It has a PA legal rarity status and a PABS suggested rarity status of Threatened.

The species grows in fens and limestone-influenced wetlands.

Yellow Sedge has a transcontinental range across the cooler regions of North America. In Pennsylvania, it is considered a northern species, and has been documented historically in the glaciated northwestern and northeastern counties.

The viability of populations of Yellow Sedge and its habitat may be enhanced by creating buffers and protecting the natural hydrology around wetlands and controlling invasive species.