This sedge is a great alternative to typical lawn grass. 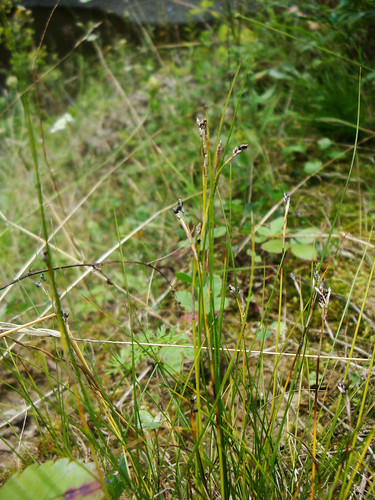 Ebony sedge (Carex eburnea) is a low, grass-like plant with extremely slender, elongate leaves and very small, three-sided, black, nutlet-like fruits in terminal clusters that appear in late spring. The fruits may persist for months after maturing. The plant has creeping, underground stems. It is one of the more easily distinguished species of the large and complex genus Carex.

The ebony sedge has been given a status of Endangered on the Plants of Special Concern in Pennsylvania list by the Pennsylvania Biological Survey and the Department of Conservation and Natural Resources, based on the relatively few historical and recent records that have been documented in the state. More field work is needed in order to justify this status, since the plant may have been overlooked due to its inconspicuous appearance and because its habitat is not always easily accessible.

The species grows in a variety of habitats in its range, but in Pennsylvania it is typically found on cliffs, outcrops, steep slopes and banks, often on northerly exposures, that are composed of limestone or calcareous rock.