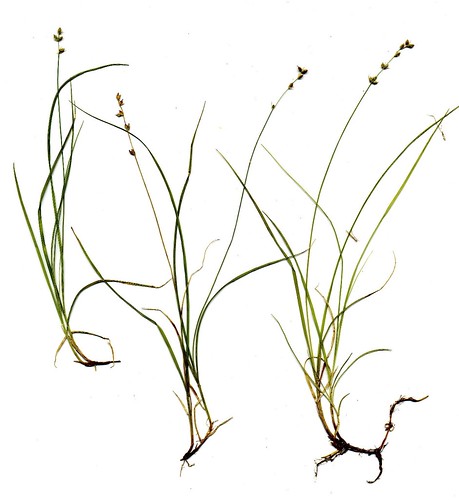 Soft-leaved Sedge is a relatively delicate perennial grass-like plant that produces wide-spreading underground stems, or rhizomes. The three-sided aerial stems may grow to 0.3 m in height, but are often shorter. The leaves have a sheathing basal portion and an elongate and narrow blade that is alternately arranged and about 1-2 mm in width. The minute flowers, which appear in spring, are scattered in alternately arranged groups along the upper parts of the stem, with the male flowers at the very top and the female flowers (usually 1-6 per cluster) directly below. The plant is most recognizable when fruiting in late spring and early summer, with the fruits being enclosed in sac-like structures, or perigynia, which are about 2.5 mm in length and rounded in cross-section.

The PA Biological Survey (PABS) considers Soft-leaved Sedge to be a species of special concern, based on the moderate number of locations recently confirmed and the wetland habitat. It has a PA legal rarity status and a PABS suggested rarity status of Rare.

Soft-leaved sedge has a transcontinental range across the cooler regions of North America. In Pennsylvania, it is considered a northern species, and has been documented historically in the northern counties.

The viability of populations of Soft-leaved Sedge and its habitat may be enhanced by creating buffers and protecting the natural hydrology around wetlands and controlling invasive species.