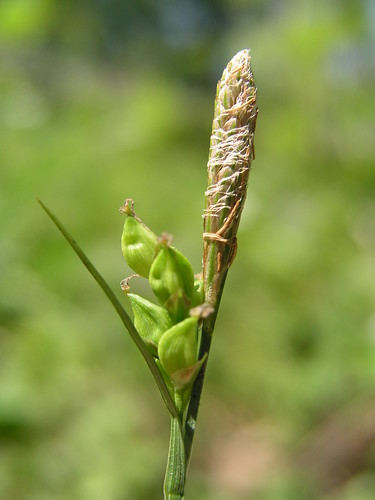 Carey's sedge (Carex careyana) is a grass-like plant that reaches 30-60cm in height. It grows in dense tufts and has a distinctive purplish color at the base of each leafy stem. The leaves are linear, elongate, and are relatively wide, up to 18mm. The individual flowers are tiny and are grouped in all male or all female clusters along the stem. The female spikes contain four to nine sac-like structures (perigynia) that are strongly triangular in cross-section and relatively large, 5-7mm long when compared to related species.

The PA Biological Survey considers Carey's sedge to be a species of special concern, based on the very few occurrences that have been confirmed and the specialized and infrequent habitat. It has been assigned a rarity status of Endangered.

The species grows in woodlands with a limestone or calcareous substrate.

In Pennsylvania, the few known occurrences are located in the western half of the state.

Carey's sedge is a plant of calcareous woodlands, and has threats from quarrying, invasive species, and logging.

Creating buffers around fragmented habitat and controlling of invasive species would be beneficial in protecting occurrences.