Individual flowers can be male or female and both sexes can be found on the same plant. 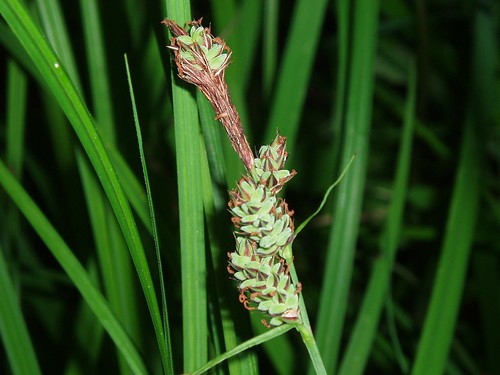 Brown sedge (Carex buxbaumii) is a grass-like plant that grows from long creeping rhizomes. The stems are .5-1m tall and are red-tinged at the base. The leaves are linear and elongate and about 1.5-4mm wide. The individual flowers are tiny, either male or female, and are clustered in cylindrical spikes near the top of flowering stems. Female flowers are enclosed by pale green sac-like structures, called perigynia, each of which is subtended by a strongly contrasting brown to dark purple scale that has a bristle-tip.

The PA Biological Survey considers brown sedge to be a species of special concern, based on the relatively few occurrences that have been confirmed and its wetland habitat. It has been assigned a rarity status of Rare.

The species grows in wetlands, including marshes, swales, meadows, and swamps, especially on calcareous substrate.

In Pennsylvania, it occurs mostly in the southern half of the state.

Creating buffers around wetlands, controlling of invasive species, and protecting of wetland hydrology will help to maintain occurrences of brown sedge.