The name for this species comes from the Latin word "bullatas" meaning inflated - this refers to the inflated perigynia of the spike of the plant. 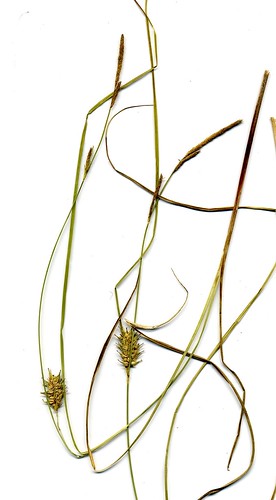 Bull sedge (Carex bullata) is a grass-like plant that forms colonies. The aerial stems are triangular in cross-section, purple-tinged near the base, and stand three to ten decimeters tall. The leaves have linear, elongated blades that are smooth, light green, and about 2-4mm wide. The flowers are unisexual, grouped in one to three male spikes at the top of the stem and one or two bur-like female spikes below. The female spike consist of individual inflated sac-like structures, or perigynia, which are roughly 6-10mm long, arranged around the spike into eight to twelve vertical rows, and contain the triangular fruit.

The PA Biological Survey (PABS) considers bull sedge to be a species of special concern, based on the very few occurrences that have been recently confirmed and its wetland habitat. It has a PA legal rarity status and a PABS suggested rarity status of Endangered. Fewer than five populations are currently known from the state.

It grows in swamps, seepages, boggy wetlands and along streamlets.

In Pennsylvania, this species occurs on a western border of its range and has been documented historically in a few eastern counties.

The viability of populations of bull sedge and its habitat may be enhanced by creating buffers around wetlands, controlling invasive species, and protecting the natural hydrology surrounding wetlands.