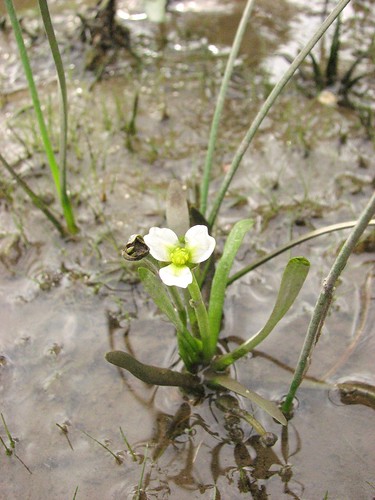 Long-lobed arrowhead (Sagittaria calycina var. spongiosa) is a small annual herb growing to about 30cm in height. The leaves have a relatively broad spongy leaf stalk that expands slightly at the tip into a spatula-like or elliptic blade. The flowers, appearing from July to September, have three white petals that are only a few millimeters in length. The flowers occur singly or up to a few in a whorl, with the stalks somewhat broad and spongy like the leaf stalks. The sepals of each flower are persistent and enclose the fruiting head, which consists of many small oneseeded, flattened fruits that are up to 2mm in length.

The PA Biological Survey (PABS) has assigned long-lobed arrowhead a rarity status of Endangered, based on the limited number of populations that have been confirmed, the small population sizes, the limited state range, and the specialized habitat.

Long-lobed arrowhead grows in intertidal marshes, mudflats, and shorelines. The intertidal populations are subjected to daily cycles of exposure and inundation.

In Pennsylvania, this species has been documented in the southeastern counties, and along Lake Erie in Erie County