Turpentine can be obtained from the resin of all pine trees and used as an antiseptic, diuretic or rubefacient. 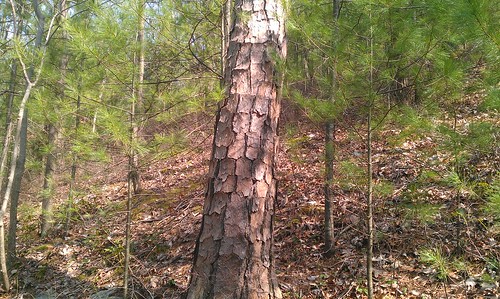 Short-leaf pine (Pinus echinata) is an evergreen coniferous tree that may grow 25-30m tall, often with much of the trunk free of lateral dead branches. The bark is reddish-brown and forms scaly plates. The leaves are evergreen, needle-like, in bundles of two or occasionally three, from five to 12cm long, relatively slender, and tend to be straight or only slightly twisted. The cones are narrowly egg-shaped, 4-6cm long, and made up of thin scales that are spirally arranged and have a thickened tip with a short, sharp spine. The cones may persist on the tree for several years.

The PA Biological Survey (PABS) considers short-leaf pine to be a species of special concern, based on the relatively few occurrences that have been recently confirmed. It does not have a PA legal rarity status, but has been assigned a suggested rarity status of Undetermined by PABS meaning that more information is needed before a more definitive rarity status can be designated.

It grows mainly in well drained upland woods and slopes.

In Pennsylvania, where it reaches a northern border
of its range, the occurrences are primarily in the southcentral counties.

More field surveys are needed to determine the range, abundance, and ecological requirements of short-leaf pine. Based on current data, the long-term viability of occurrences will probably require special management, such as prescribed fire, since the species is very intolerant of shade and early successional conditions are necessary for establishment of seedlings.