The common name of beard tongue comes from the tuft of hair found on the stamen of the speices. 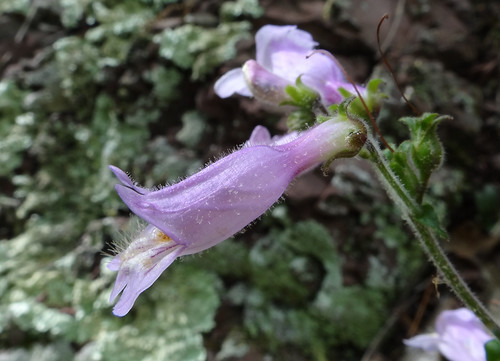 Gray beardtongue (Penstemon canescens) is a perennial, hairy-stemmed herb from 40-80cm in height. The leaves are oppositely arranged, hairy, toothed on the margin, and at least the upper pairs of leaves lack distinct leaf stalks. The flowers are pale purplish and appear in late May and early June. The flowers have a two-lipped appearance, and an open throat that allows the entrance of pollinating insects. The name “beardtongue” refers to a sterile stamen that is covered with hairs. The fruit is a many-seeded capsule.

The PA Biological Survey considers gray beardtongue to be a species of special concern, based on the relatively few occurrences that have been confirmed and the limited range in the state. It has been assigned a rarity status of Undetermined, meaning that more information is needed before a more definitive rarity status can be designated.

In Pennsylvania, most of the known occurrences are located in the south-central counties.

More field surveys are needed to determine the range, abundance, and ecological requirements of the gray beardtongue before a more definitive conservation status, if needed, can be assigned.