The common name of lousewort comes from the incorrect belief that if sheep and cattle consumed this plant a lice infestation would occur. 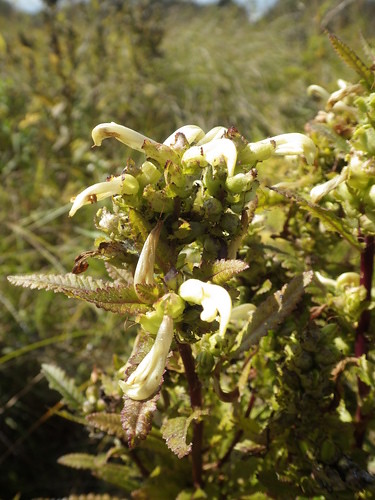 Swamp lousewort (Pedicularis lanceolata) is a perennial herb that may grow from 30-90cm tall. The leaves are oppositely arranged on the lower stem and alternately arranged on the upper stem, oblong to lance-shaped, variably lobed or toothed on the margins, and up to 10cm long. The flowers, appearing in August and September, occur in a terminal cluster. The petals are partially fused into a tube-like shape, yellowish, and about 2.5cm long. The fruit consists of a many-seeded capsule.

The PA Biological Survey (PABS) considers swamp lousewort to be a species of special concern, based on the few occurrences that have been recently confirmed and its specialized wetland habitat. It does not have a PA legal rarity status, but has been assigned a suggested rarity status of Endangered by PABS. About ten populations of swamp lousewort are currently known in the state.

it grows in calcareous wetlands, including boggy meadows, marshes, swamps, and fens.

In Pennsylvania, it occurs mostly in the southern and northwestern counties,

Excessive deer browsing may be a threat in some locations.

The known occurrences of swamp lousewort and its habitat type will be enhanced by creating buffers around its habitat, removal of invasive species, and protection of wetland hydrology.