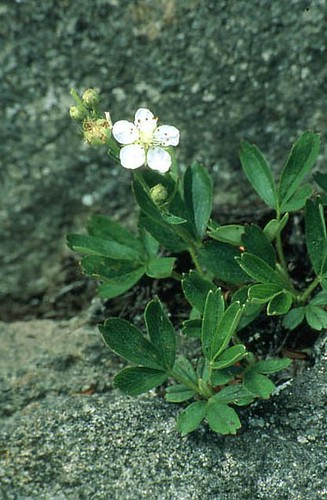 Three-toothed Cinquefoil is a low-growing evergreen perennial, somewhat woody at the base, which forms small mat-like colonies. While the flowering stalk may reach 15 cm in height, it is often much shorter, and plants may only be an inch or two above the substrate. The leaves have a very distinctive shape and provide the common name of the plant. They are alternately arranged, thick in texture, to 5 cm in length, with the lower part of the stalk with a wing-like fringe, or stipule and the blade portion divided into 3 leaflets, each of which has 3 small teeth at its tip. The leaves often turn red over the winter. The white flowers, which appear from May to July, are grouped in branched clusters at the end of the branchlets. Each individual flower has 5 petals and many stamens. The fruits and seeds are fused together, and are dry, hairy, and less than 1 mm in length.

Three-toothed Cinquefoil ranges from Newfoundland to Alberta and south into Georgia, Tennessee, Iowa, and North Dakota. In Pennsylvania, it represents a northerly species and has been documented historically in a few northeastern counties.

Although only a few populations of Three-toothed Cinquefoil are known, they are situated in relatively remote areas where the habitat is likely to be kept in a natural state. Active management, such as the use of prescribed fire, may be beneficial in maintaining these areas or in creating additional habitat.