The root of this species is rich in tannin which can be used for treating diarrhoea, dysentery and bleeding. 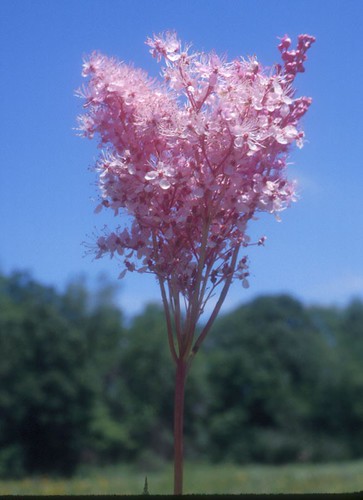 Queen-of-the-prairie (Filipendula rubra) is a member of the rose family that spreads clonally by the growth of underground stems called rhizomes as well as reproducing sexually. Individual ramets, or members of a clone, grow from 1-2m tall; a single clone may spread over scores of square meters.

Queen-of-the-prairie grows mainly in fens, calcium-rich peat-producing wetlands, but clones may also be found in wet woodlands and grassland seeps.

Queen-of-the-prairie populations will benefit greatly from protection of their wetland habitats, which are often destroyed or fragmented by human development. Forest management practices can also be altered to allow more natural disturbances to create early successional habitat, and existing populations should be protected from collection, which may be a minor concern. Efforts to re-establish queen-of-the-prairie populations in unoccupied habitat should make use of seed or transplant material taken from a wide variety of parent clones to ensure that new populations will have sufficient genetic diversity to produce viable seed.